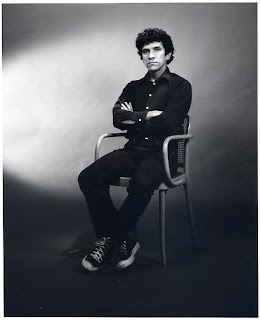 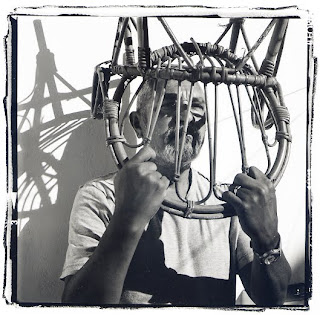 Essentially one chair is equal to all chairs, hence seen one seen them all. The only change is in the circumstances upon which we had happened to stumble on them, or sit and use them. The difference as well as the similarities between objects and us mortals is the evident marks that time has inflicted on our fragile anatomies, our ever changing countenance and exterior appearance.
So it is with great excitement that I have recently received, from a box of a distant past, the sitting down portrait taken by a friend of mine in Toronto circa 1979, and feel that the man thus represented is not the same as the one holding the little wicker dilapidated job, taken just about a month ago in a different universe.
The men in the two shots are similar in that the younger one did not know and had no way of understanding what the aging process was all about and the old one is still involved in the same conundrum. But right there all similarities end.
Posted by lalo borja at 03:34